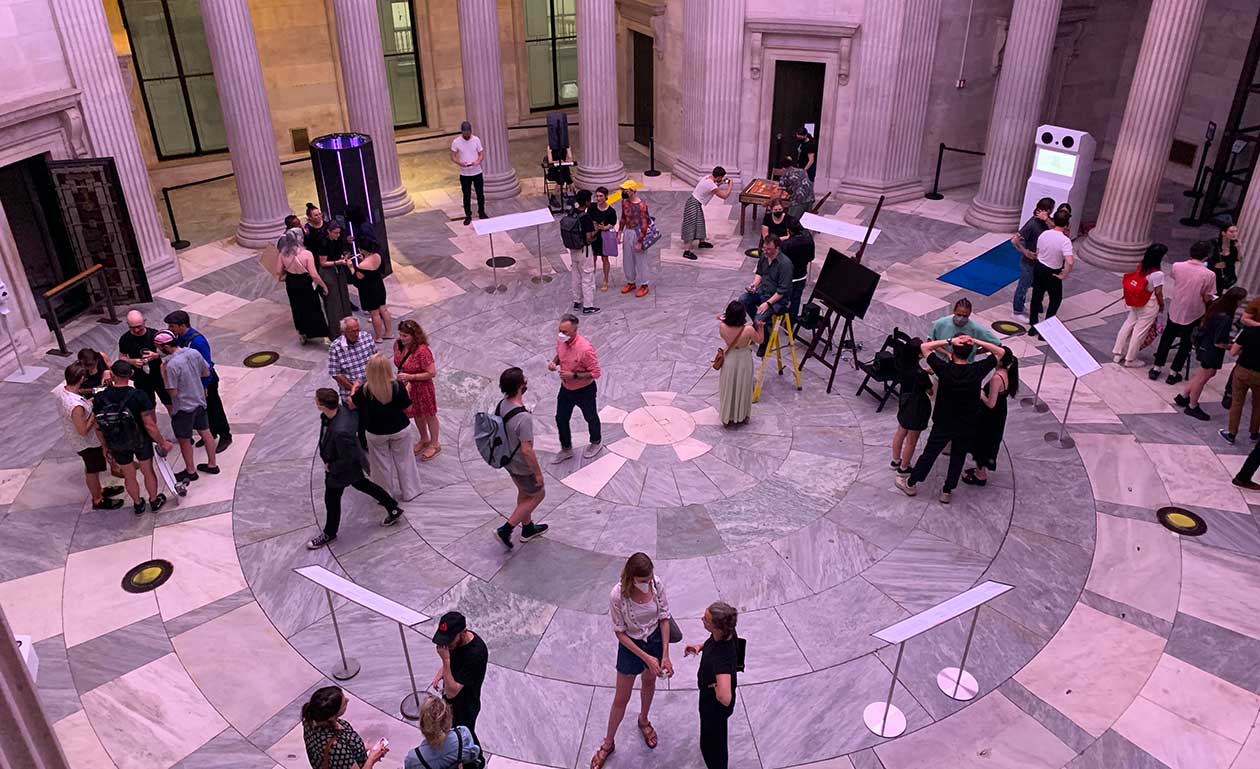 Photo courtesy of The Frank-Ratchye Studio for Creative Inquiry

Now on View at Federal Hall

Federal Hall National Memorial will commemorate the 230th anniversary of the Bill of Rights in an unexpected way: with an exhibition of games. “Shall Make, Shall Be: The Bill of Rights at Play'' will open in Federal Hall’s Grand Rotunda July 4, 2022 and remain through August 31. To stay informed, please join our mailing list.

“Human rights may be guaranteed by law, but one’s humanity is never a given.”

―Sarah Kendzior, The View from Flyover Country: Dispatches from the Forgotten America

Shall Make, Shall Be: The Bill of Rights at Play is a curatorial project that invited independent artists and game designers to create playable artworks themed around the individual amendments in the Bill of Rights, drawing on their effects, interpretations, and legal meanings in US culture. These works are meant to be understood as critical games, using the mechanisms of play to interrogate, critique, and inform our understanding of civil liberties in the twenty-first century.

Artists are obvious stakeholders in the First Amendment, alongside journalists, activists, and anyone else who sees the phrase “a more perfect union” as a call to action rather than a statement of fact. Our social discourse is openly political: we engage in satire, activism, participation, critique, and demagoguery, sometimes all in a single conversation. The ability for an individual in the United States to exercise their right to impugn the government is something that we frequently take for granted, and we easily forget that there are plenty of countries where this can get you fined, arrested, incarcerated, or killed. Most Americans, rightly, find such violence disturbing, but even more disturbing is the increasing number of Americans who don’t seem to have a problem with it.

The Bill of Rights as a focal point certainly makes lots of sense these days, given the frequency with which rights contained within come up in the lives of those in and around the United States. But games, play, and interactive artworks about the Bill of Rights? Not as obvious, perhaps, but definitely a timely way for reexamining and reconsidering the spectrum of rights articulated, interpreted, enacted, clung to, refuted, and otherwise swirling inside and giving structure to the American experiment. Indeed, games have overtaken the global film industry and also broken through to “serious” credibility as a mode of critical and contemporary art practice.

Shall Make, Shall Be provides ten interpretations through which we can play with these ideas. The games and interactive artworks in this exhibition come from clear points of view and open up lines of thinking about the meaning and implications of the framework we use to articulate the rights of citizens. One way to think of games is as playable systems. Not unlike life itself, gameplay shows us how our laws, cultural norms, and lived experiences don’t always lead to the outcomes we may envision.

This has been our goal and hope for the Shall Make, Shall Be project: to share ten works that give us a space to consider the underlying foundations of the American experiment and the identity and life these ten amendments created. On this site, and in the forthcoming catalogue (spring 2023), you will find five elements for each amendment: the verbatim text of each amendment; an elucidating essay by a constitutional expert on the amendment’s contemporary relevance; our curators’ notes on the work created about the amendment; the artists’ own thoughts on what concepts and principles inspired their project; and documentation of the work itself. We believe these works help us see new paths forward toward a chance at life, liberty, and the pursuit of happiness.

For more information on Shall Make, Shall Be, please fill out this form, or reach out to the individuals below.

The New School: Will Wilbur, wilburw@newschool.edu