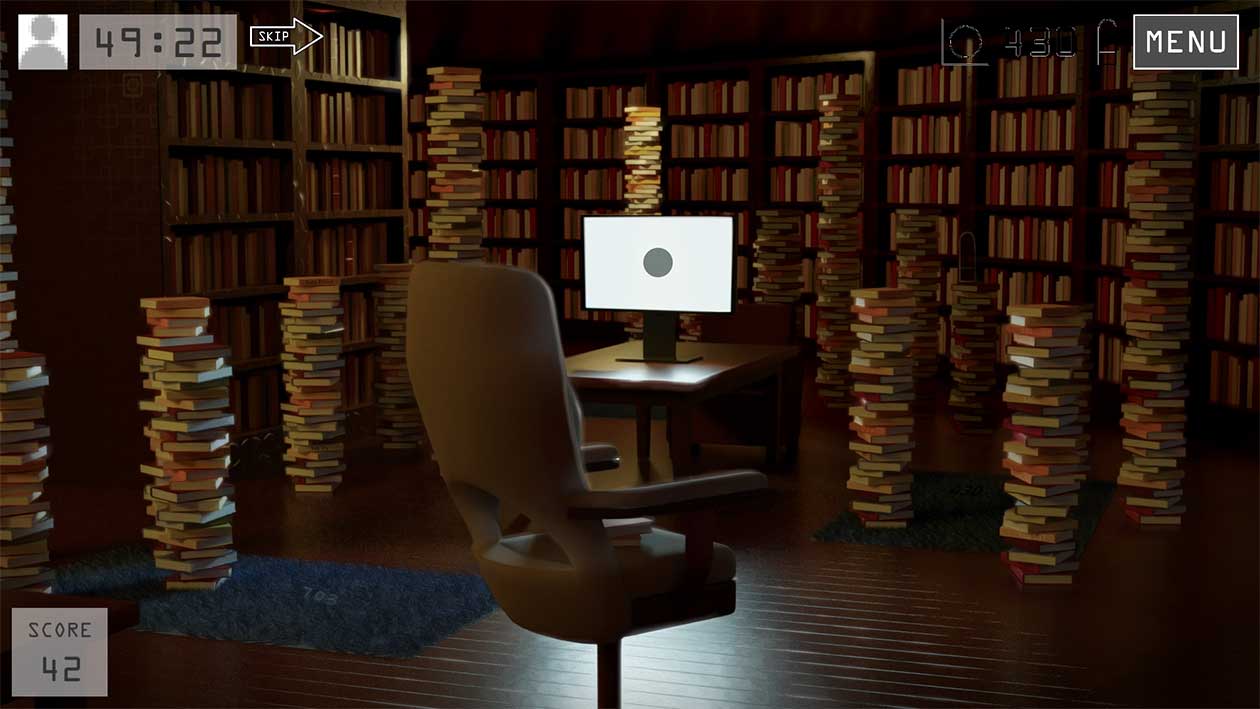 Cyber Soldiers in Cyber Houses is a digital multimedia eye-spy game spanning thirty-two rooms with narration by two AI home assistants. In a future cyber 9/11-esque attack, the US government has increased cyber surveillance on all citizens. In this AI-assisted home, the player races against time to debug their house, finding the hidden items or bugs in each room before the game ends. Each room is attached to a Person of Interest who will be compromised if the player does not find the bugs. There is an option for the player to skip the room and move on to the next one. However, skipping a room comes at a risk. If the player has not found enough bugs to clear the room, the Person of Interest may be compromised and points will be added to the player’s score. When the timer runs out, the game automatically ends and the remaining points are tallied and added to the player’s score. The scores for all the players are displayed on an adjacent screen. The player should aim for a low score and must balance time management and risk to get the best possible outcome.

Cyber Soldiers in Cyber Houses explores the implications of the Third Amendment on digital privacy. Through AI dialogue, the game examines the application of our current laws and values on emerging technology as well as the problems inherent in technology, metadata, and mass surveillance that amplify current socioeconomic inequalities. Today, rather than soldiers, we have drones; instead of spies, we have malware. Cyber Soldiers in Cyber Houses examines the future relationship between the government and its people in the advent of stronger technology and our increased reliance on it.

The Third Amendment is the entryway to larger and more fundamental questions about privacy, the connection between the military and private companies, and the unprecedented power new technology gives the government and the hidden nature of that power. The game aims to arm the viewer with information in order to allow them to form their own conclusions about what they want policy to be. The mechanics of the game promote empathy toward others who might not have the time or resources to devote to their own privacy, even if the protection of others is inconvenient to the player. The game hopes to fight against technology designed for convenience that bypasses critical thinking. Technology in and of itself is an amoral tool, but sunk into a system of immorality it becomes an exponential factor in discrimination. It can, however, be reclaimed and repurposed for good.

How do we apply former structures, laws, and values on a rapidly expanding frontier of powerful technology? Data analysis on a grand scale has widened the scope of possible good and harm that large institutions can do. Big data and cyber surveillance are a constantly expanding frontier. There are still very few rules and restrictions to abide by, no one to answer to, and no checks on abuses of power. Currently we are expecting corporations and government institutions to hold their own leash. Cyber Soldiers in Cyber Houses shows how data and surveillance technology affects us in the past and in the present and asks what we are willing to allow in the future.

Special thanks to Athena Hosek for programming contributions that made the completion of this project possible. 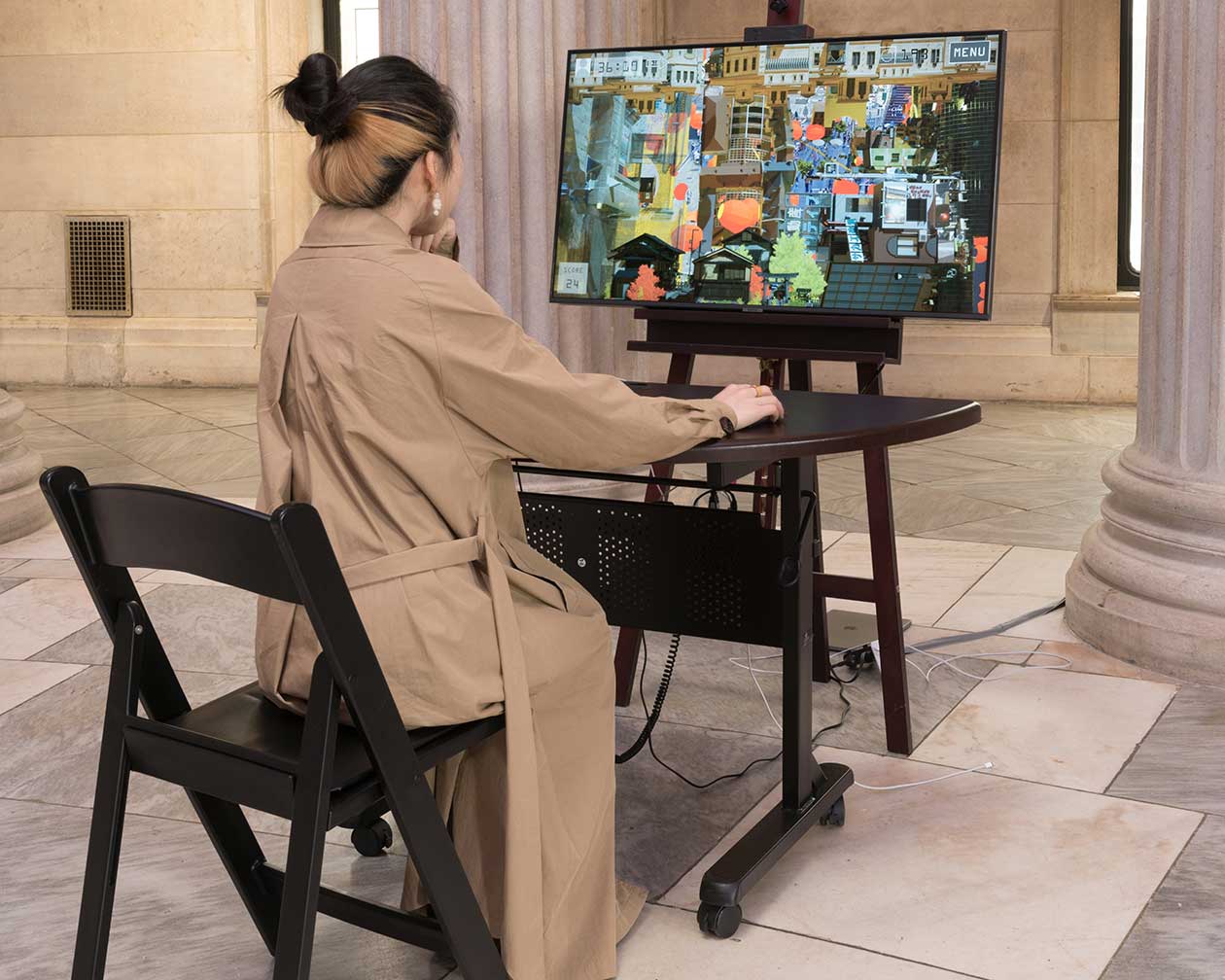 It is from this vantage that Vi Trinh speculates on the internet as a site for privacy from government intrusion. This is not a big leap. Indeed, much of what we recognize as the internet originated with ARPANET (US Advanced Research Projects Agency Network), a project launched in 1969 with funding by the US military. It was not until 1983 that the domain name system opened the ARPANET for applications beyond the military. A year later, the science fiction author William Gibson introduced the term cyberspace, creating a spatial understanding of the internet and establishing a model for comprehending the otherwise shapeless network.

In Cyber Soldiers in Cyber Houses, players solve hidden-object puzzles in which the player locates household infringements on cyber privacy contained within the images. True to the genre, each puzzle presents the player with a space—typically a room, filled with thematic furnishings, objects, and inhabitants. The player’s goal is to find all instances of a number, a microphone, and a camera in the space. Some instances of these objects are easily identified, others more obscured. Later in the game, the spaces shift to amorphous representations of cyberspace. Mechanically, the genre emphasizes pattern identification and visual acuity. Within Trinh’s work, the genre operates metaphorically: Can we see the potential for intrusion via the increasingly present “smart” appliances, alarm systems, digital personal assistants, and all manner of internet-enabled devices we bring into our homes?

As the player moves through Trinh’s puzzles, the traditional physicality of objects in the hidden-object puzzle become increasingly abstract within speculative imaginings of cyberspace. When the quartered soldiers are no longer physically present, how are our rights to domestic privacy preserved?

Vi Trinh works in digital and traditional media to examine the relationship between ecological and social patterns. A Vietnamese-American artist based in Washington, DC, Trinh graduated from the University of Richmond in 2019 with a B.A. in Visual and Media Arts Practice & Leadership. She is currently a MFA Fine Arts candidate at Goldsmiths University of London. Much of Trinh’s work is based in and on the Internet. Through her interactive digital art, Trinh explores dynamics of power and control, freedom and restraint, and how they manifest in networked media. Themes in Trinh’s work include aesthetics in ecological emergency; new temporal realities created by very large-scale phenomena; and the contradiction between the Internet as a seemingly free and democratic space, and the reality of the Internet as a site of exclusionary design, extractive corporatization, technologized colonialism, and the perpetuation of white supremacy.