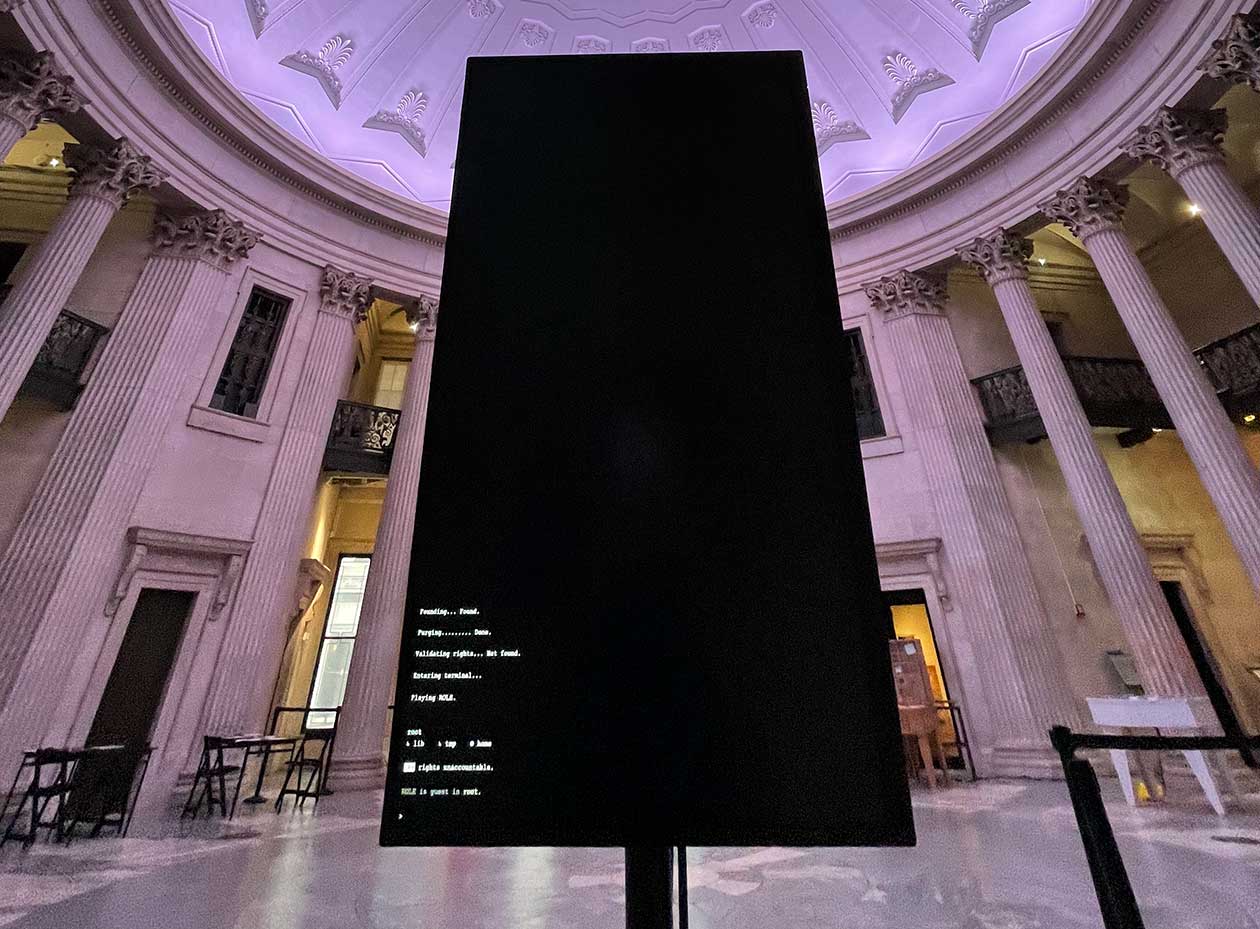 Photo courtesy of the artist

Father Figure is a text adventure that presents initially as a computer terminal. Using a command-line interface that is intentionally opaque and limiting, one is instructed to locate and reclaim one’s missing rights by applying basic text commands. The game begins in earnest when one learns that other commands can be issued to exit the command-line “shell.” After exiting the terminal, one finds oneself in a low-fidelity simulation of nature, the space where one’s natural rights can be expressed. This leads one eventually to break and enter a House upon pursuing acts of either intentional or accidental violence that echo the US Capitol insurrection of January 6, 2021. What one must confront in the House is the open question of what rights are ultimately “known.”

Father Figure considers the Ninth Amendment as a mechanism of whiteness and inserts the user into its scaffold, a text-based simulation of the dynamic at play. In computer usage, the delegation of “rights” does not guarantee freedom but places the user in an inherently compromised position, dependent on the system administrator. This, in turn, prompts a user to grapple directly with how “rights” are defined, granted, and denied—and by whom.

The encounter with the computer aims to impart a material sense of a contradiction at the center of American identity. The Ninth Amendment, which accounts for “certain” rights enumerated as well as “others retained” elsewhere, implies that the rights of the people by nature remain in excess of what can be described. We have a known constitution, but we do not know what constitutes the exception.

This contradiction is inevitably linked to whiteness, the silent majority that holds its tacit rights in reserve like an arms stockpile. It can be argued that the American exception is freedom from accountability, a freedom symbolized and protected by the safety mechanism built into the American contract. For users of the system, then, to what extent is the American dream coterminous with the guarantees of white supremacy? What can define the limit of self-governance? 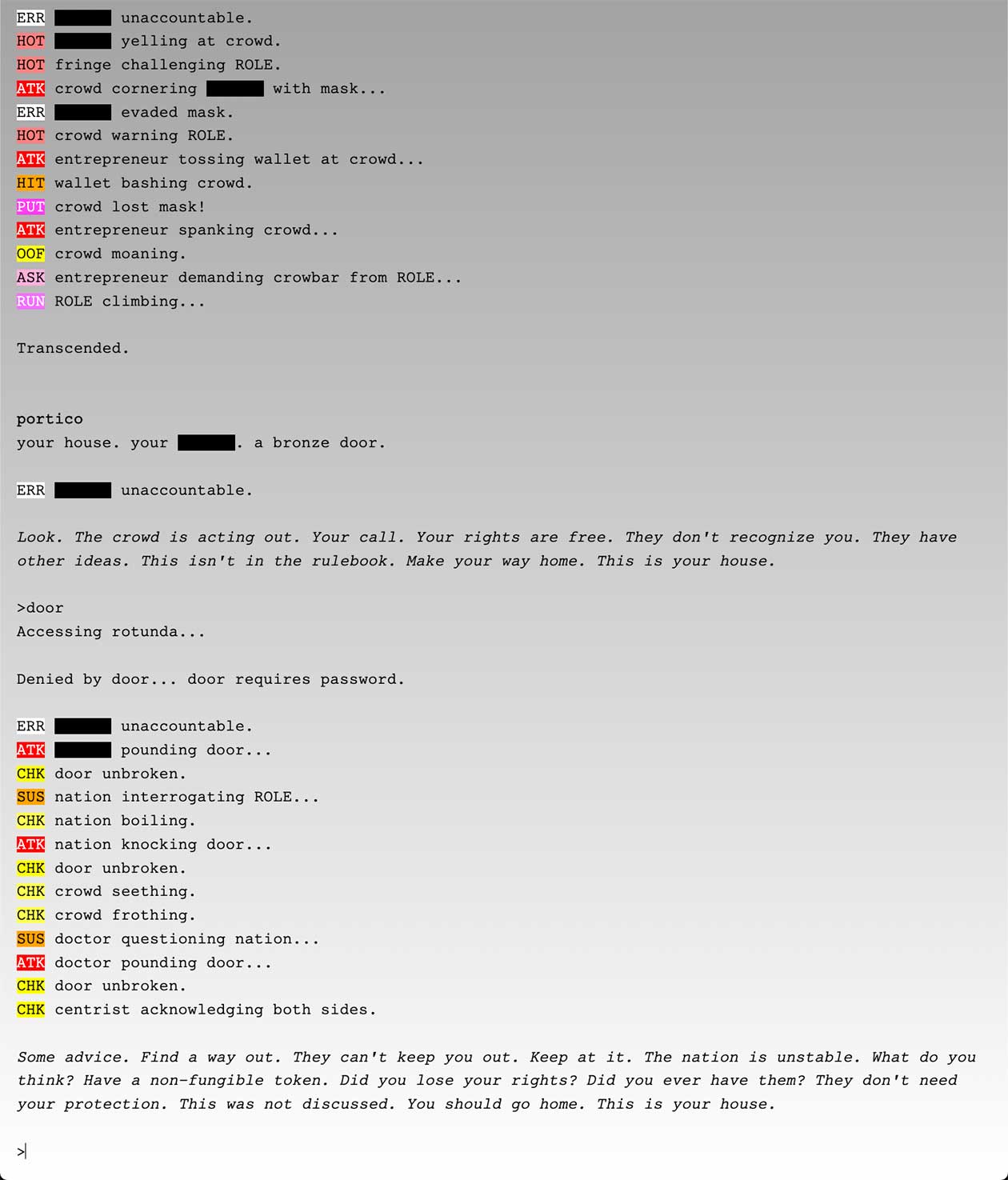 One way to think about game design is the creation of spaces of possibility inside of which players play. The Ninth Amendment concerns itself with making clear that the space of possibility defined by the Constitution and its amendments will always be incomplete and subject to change. Depending on your perspective, the Ninth Amendment functions as an acknowledgment, a backstop, a tool, or a trap. As an acknowledgment, the Ninth recognizes the limits of its authors’ ability to capture in the Constitution all important rights, both those known and those yet to be known. As a backstop, the Ninth served to placate those concerned about the Bill of Rights being interpreted as fully defining individual rights under the Constitution. As a tool, the Ninth affords those with deep knowledge of the Constitution the tools to expand the rights minimally outlined in the original document and its amendments. And as a trap, the Ninth allows those in power to change the rules to benefit or harm. In all four cases, the Bill of Rights is made from and about language, and the ways it and the larger Constitution enumerate if not a ruleset, then a value system for the United States.

Ryan Kuo’s Father Figure investigates the Ninth using the text-adventure genre of games within the context of a command line operating system. Players of text-adventure games interact with a world presented in prose using a very specific dialect to navigate and engage with the story world. For those with fluency in the syntax and vocabulary, engaging the space of possibility authored by the game’s creators can be a richly satisfying experience. To someone not versed in the syntax, text adventures (and command line interfaces) can be frustrating—you quite literally can’t do anything if you don’t know the right words and phrases to move through and interact with the objects and inhabitants.

Kuo’s work is a playable metaphor of the relationship one can have with the space of possibilities for the Constitution as created by the Ninth Amendment. If versed in the logics of text adventures (or US legal theory or a command line interface), one can move through Father Figure; if not familiar with the internal logics, one can at best do nothing, and, more likely, will have the effects of the game (or legal system) happen to them. Kuo asks us to think about who is and who is not allowed to write the new rights, and who does and does not benefit from these new rights.

Ryan Kuo creates works that are process-based, diagrammatic, and caught in a state of argument. He uses video games, productivity software, web design, and text to produce circuitous and unresolved movements that track the passage of objects through white escape routes. He holds a Master of Science in Art, Culture and Technology from MIT, and has held residencies at Pioneer Works and the Queens Museum Studio Program. Kuo’s works have been shown in venues such as the Whitney Museum of American Art, Queens Museum, TRANSFER, and bitforms gallery, and are distributed online at left gallery. His recent and forthcoming projects include File: A User’s Manual, an artist’s book about aspirational workflows modeled after software guides for power users; and Faith, a conversational AI agent that zealously embodies the blind “faith” underpinning both white supremacy and miserable white liberalism.

Kuo lives and works in New York City. He is not a programmer.