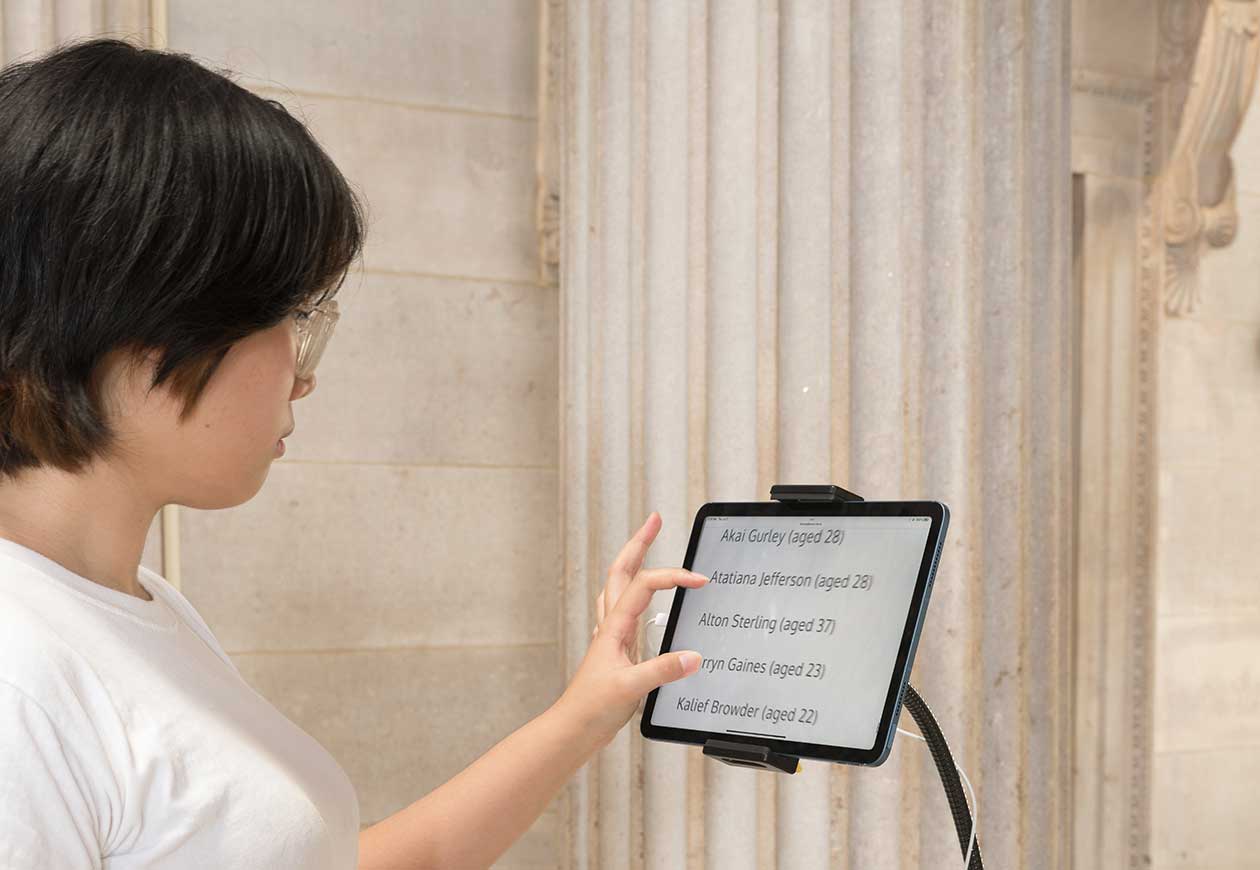 Contempt is a single-player interactive experience, opening with a playable reflection on the Fourth Amendment. What do these words mean? What is the emphasis? Players arrange words from the Bill of Rights on-screen. Once the amendment is complete, the screen fades to black. The player is then roused from sleep in a pitch-black room. Given a matter of seconds to understand what is happening, the player must make decisions literally in the dark, reminiscent of the experience of an unlawful search and seizure. The piece opens again on a black screen with more detail: this time the player has less than two minutes to make a life-altering decision—should they look for a flashlight? A gun? Get dressed? What can they do in this scenario? After a brief explanation of their rights and the amendment, players return to their understanding of the amendment once again.

The name Contempt holds multiple meanings in this work. Referencing both the idea of willful disobedience under the law and the contempt that Black Americans face from unequal treatment by police, this piece hopes to have players understand the current interpretation of the Fourth Amendment, its historical significance, and its future.

Contempt is a response to the injustice of current events. On March 13, 2020, twenty-six-year-old Breonna Taylor was killed in her home. Peacefully sleeping, the Louisville-based emergency room technician had no idea police were approaching her apartment to execute a “no-knock” warrant, searching for contraband and a different suspect. The officers fired thirty-two rounds, fatally wounding Taylor and sparking an international conversation on policing and reform.

Black Lives Matter had become a rallying cry for justice years before that fateful day in Louisville, demanding equal treatment under the law for Black citizens. As an ever-growing list of names detailed a litany of injustices, the role of police practices in Taylor’s death fell under a microscope. But as her death became a part of the nightly news cycle, it grew obvious that many in the United States did not see Black Americans as citizens subject to equal protections under the law. Other high-profile cases, like that of thirty-two-year-old Philando Castile, who was killed by law enforcement during a traffic stop in 2016, and the chain of events that began with a 2015 traffic stop for twenty-eight-year-old Sandra Bland and ended in her death, illustrated that flagrant violations of foundational civil liberties are frequently excused depending on the race of the victim. It is clear that Black Americans are not truly protected by the explicit safeguards the Bill of Rights should afford to all citizens.

The Fourth Amendment, which provides protection against unlawful search and seizure, should receive the same full-throated defense as we see of the First and Second Amendments. But why are Black bodies seen as undeserving of the same laws and protections as other citizens? Contempt is designed to explore the Fourth Amendment and its protections through prose and playable experiences, examining how race and American history have influenced the interpretation and popular understanding of this amendment.

Like games, laws are fragile ecosystems that require attention to maintain their fairness. Just because a law is written doesn’t mean it will be faithfully followed any more than a game’s rules will be followed by all players. The idea of “house rules” helps us think about the interpretation and upholding of laws like the Fourth Amendment. Sometimes police operate under “house rules” that allow them manipulation of the law to their advantage. Inevitably, this leads to not all citizens being given equal consideration when it comes to their right not to be searched. Too often, this happens because of biases—of race, gender, socioeconomic status, location, and so on.

It is from this perspective that Latoya Peterson and Cherisse Santa Cruz Datu’s Contempt approaches the Fourth Amendment. In a series of mini games, players move through vignettes considering the amendment from several vantages—as a text, as a first-person experience of a “no-knock” home search, as an audio excerpt from a lawyer defending two sadly famous victims of a “no-knock” warrant, and, finally, as a word puzzle in which the amendment can be rewritten. Players move from an abstract, intellectual conception of the Fourth Amendment to question the inequities inherent in the ways in which the rules protect citizens from illegal searches. What will it take to bring equity for everyone?

Cherisse Santa Cruz Datu was raised on the island of Guam. A first-generation Filipino American, she was born to Kapangpangan parents who, despite not playing games themselves, fostered her love for them—perhaps because her Gameboy kept her quiet during long car rides. She is currently a video producer at Bethesda Softworks. She previously worked in video at ESPN’s The Undefeated and Al Jazeera’s The Stream. Datu received her Masters in Game Design and her Bachelor's in Film and Media Arts from American University. A video producer with a background in broadcast news editing and digital entertainment, she finds comfort in creating small forms of playable art to help process current events.

Latoya Peterson lives at the intersection of emerging technology and culture. She is currently cofounder and CXO at Glow Up Games, a game studio working on their first title set in the world of HBO’s Insecure. Previously, she was the Deputy Editor, Digital Innovation for ESPN's The Undefeated, an Editor-at-Large at Fusion, and the Senior Digital Producer for The Stream, a social media driven news show on Al Jazeera America. In 2018, she soft launched AI in the Trap, a collaborative art project that explores the future of artificial intelligence and predictive policing through a hip-hop lens. In 2016, she produced a critically acclaimed YouTube series on Girl Gamers that was highlighted on Spotify. She is currently on the advisory board of the Data & Society Institute and the board of visitors for The John S. Knight Journalism Fellowships. She is a US-Japan Leadership Foundation Fellow and a USC Civic Media Senior Fellow. She is also part of the selection committee for the Museum of Play’s World Video Game Hall of Fame.