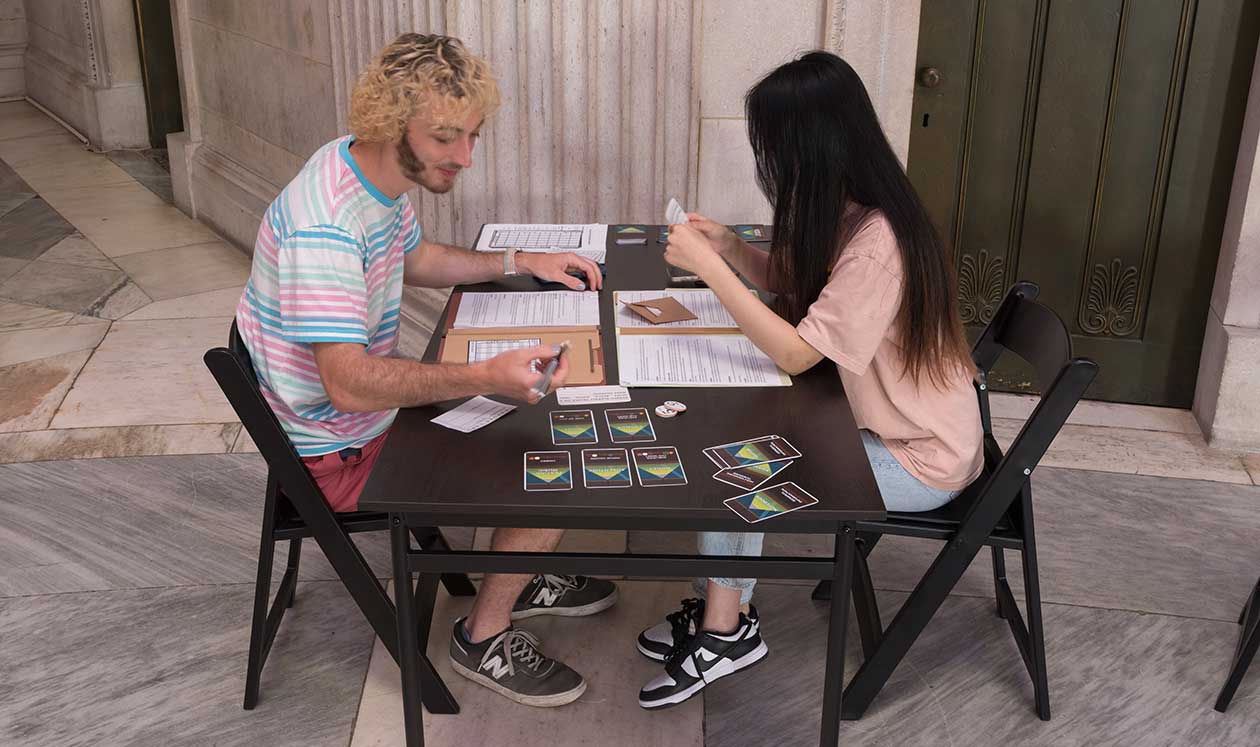 Have I used the Fifth Amendment? Yes, but never correctly, and never in any sort of actual legal situation. Normally, I used it when I refused to admit to friends that I did something I shouldn’t have. Everyone knew that I was avoiding telling the truth. It was just a fun thing to say, unless you were on the receiving end of whatever action I was denying.

These feelings of smug joy when playfully declining to share information and of frustration when someone does not admit to something are emotions that I want to capture with ___ vs ___ (read as “blank versus blank”). One person is trying their hardest to find out the truth, and the other person is trying their best to frustrate and mislead. The situation is only intensified when the people involved in this interaction know each other. ___ vs ___ plays off these feelings: the hopes of finding the truth, the fear of being found out, and the suspense of getting closer and closer to the end of the game without knowing who has the advantage.

___ vs ___ plays off a few pieces of the Fifth Amendment—more specifically, the Miranda warnings, double jeopardy, and the self-incrimination clause. At the beginning of the game, players agree on the Miranda Rights document, rules, and rights they can enact to help their play or hinder their opponent. During the game, the Suspect can “Plead the Fifth Amendment” when they feel the Investigator is getting too close to solving the crime they committed. Finally, the Investigator must do their best to make sure they do not pick the crime that the Suspect already committed. Failing to do so will result in the Suspect winning due to the Double Jeopardy Clause.

It is understandably tricky to balance a game that asks players to mislead their opponents using information they create on the fly. Much of this relies on how confident a person feels and if they can evade the truth or weed their way through their opponent’s deception. Ultimately, the experience really comes to life when playing with someone you know well, as players will make assumptions based on information that isn’t present. Rather than avoiding that feeling, a feeling that people would fall into naturally, I found that the game was successful when I leaned into those emotions. These emotions help make the interactions between the Suspect and the Investigator unique, something that can’t be duplicated but can be understood by others who have participated in the game. 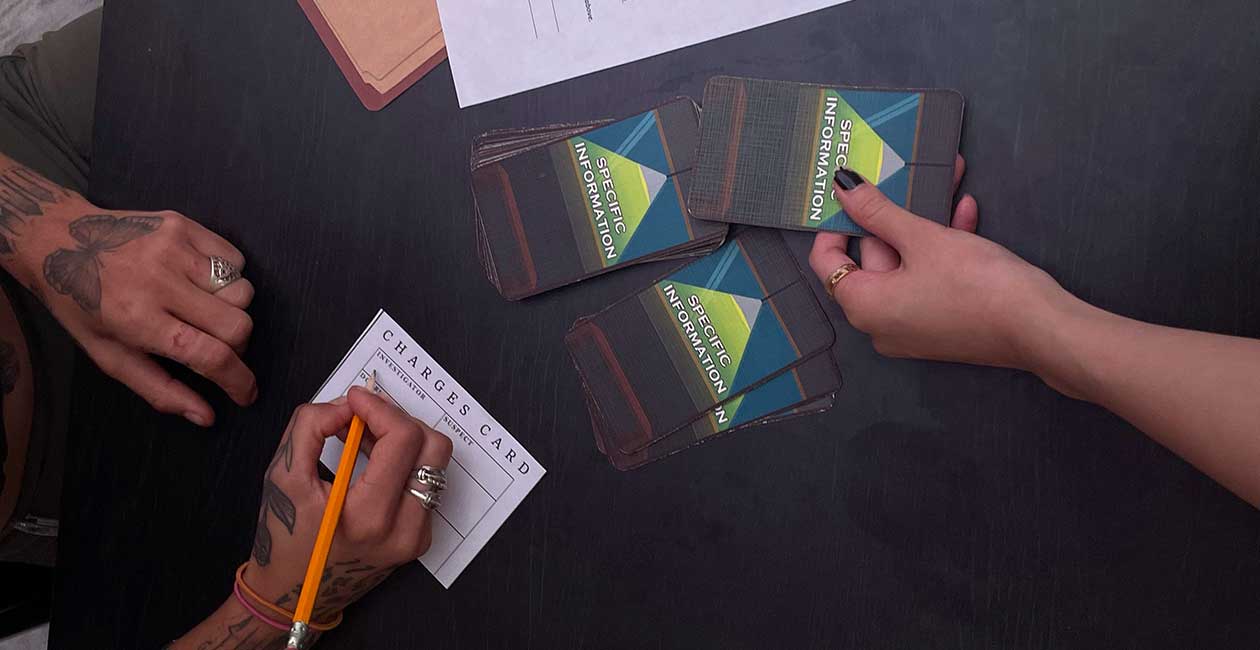 Viewed from the lens of game design, the third clause of the Fifth Amendment—the source of the right against self-incrimination—appears to be a special-case rule to patch over a loophole in the overarching principles of truthful testimony under oath and the presumption of innocence until proven guilty—if the accused can be compelled under oath to implicate themself, how can they be guaranteed the presumption of innocence? This patch, however, led to an exploit: “On the advice of counsel, I invoke my Fifth Amendment right against self-incrimination.” Pleading the Fifth has been viewed as within the letter of the law yet also outside the spirit of fair play within the careful constructs of the US court system. It is a cultural shorthand for the divide between those privileged enough to obtain top-shelf legal support and everyone else.

The Fifth Amendment finds a second life outside the courts—as an often playful, “wink, wink, nudge, nudge” nondenial of something one doesn’t want to own up to. It is from this perspective that Shawn Pierre approaches the Fifth Amendment in ___ vs ___. Emerging from the popular social deduction game genre, Pierre’s game surfaces the tensions inherent in pleading the Fifth—one’s guilt is presumed but not outright stated. Social deduction games ask players to work together to accomplish a goal while also trying to figure out who amongst them is working against the group. In ___ vs ___, one player attempts to get the truth from the other without the suspect invoking the Fifth.

Pierre’s game recontextualizes the playful embodiment of the Fifth Amendment in a light narrative context: that of a simple interrogation room complete with a plain table, sturdy (but not so comfortable) chairs, folders containing paperwork, and, of course, that signature bright light. Consider it a simple set on which the cat-and-mouse game of interrogation and (maybe?) confession unfold.

Shawn Pierre is a Visiting Assistant Arts Professor at the NYU Game Center and game designer working to combine new forms of play with different types of media. His work includes voice-controlled adventure games, social deduction SMS games, and physical games where players capture others in nets. In the past, Shawn has created and worked on crowd-based interactive activities, including installments at Graceland, as well as games for major sporting events. As a member and Project Director of Philly Game Mechanics, Shawn works to build a community where local creators meet new people and share their creative work.