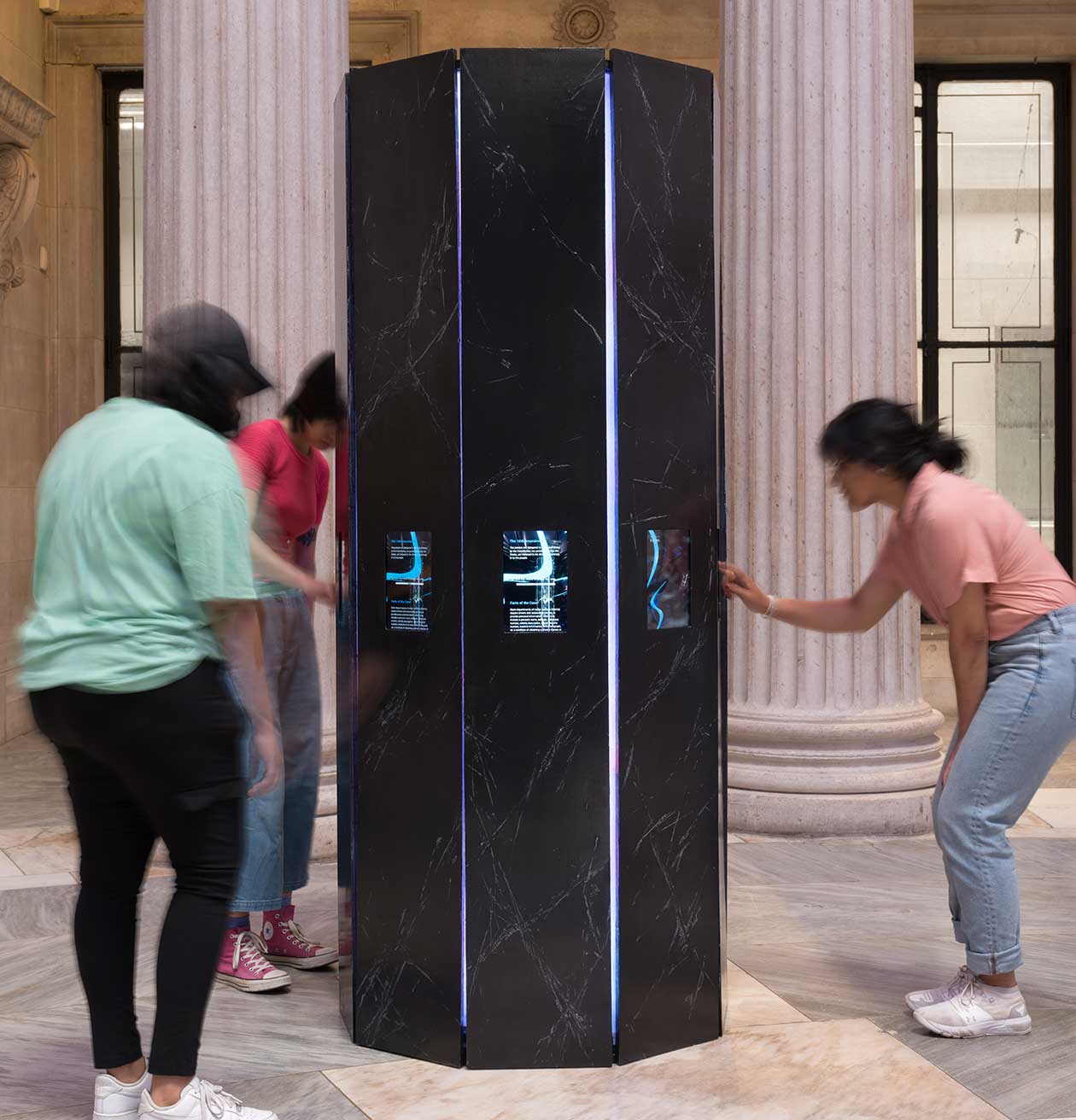 With engineering assistance by Kari Barry and Omkar Bhatt, networking by Nick Hwang, music interaction by Susie Green, and rap lyrics and performance by Toni Blackman

v.erses is an interactive musical game for multiple players. Players approach a nine-sided column with touchscreens that give a summary of a case and the opportunity to give the power to the Federal Government or the States/People. These results are tallied by a computer and create the rules that the gesturally controlled music then follows. Anyone in the space can play the music by interacting with sensors embedded in the column. If all powers are delegated to the Federal Government, the resulting music becomes a repetitive, uninteresting loop that does not respond at all to the gestural input from the players. Alternatively, if all powers are delegated to the States/People, the music becomes too responsive and chaotic. Players must create a balance between the control of the Federal Government and the freedom of the States/People in order to create an aesthetically pleasing result.

The Tenth Amendment has been called both mysterious and remarkably clear. In one sense it is “but a truism,” yet in the 1970s the Supreme Court decided that this truism has teeth. Both Clarke and Schedel were born in this time of transition, where cases decided by judicial interpretations of the Tenth Amendment are becoming more numerous and more partisan. The Supreme Court has relatively recently found “judicially-enforceable limits on the power of the federal government to regulate states” in New York v. United States (1992), where the Court decided the federal government cannot commandeer state governments into the service of federal regulatory purposes. In 2011, the Court decided that individuals can challenge federal laws on the basis of the Tenth Amendment. It is expected that a challenge to the individual mandate in the Affordable Care Act will also be decided by a nuanced understanding of the limits of federal powers. James Madison wrote, “The powers delegated by the proposed Constitution to the Federal Government are few and defined. Those which are to remain in the State Governments are numerous and indefinite.” We drew inspiration for this game from the separation of powers in the Tenth Amendment and from the specialized research area within Human Computer Interface (HCI) called New Interfaces for Musical Expression (NIME). Our system works on a special web-based application called CollabHub, developed by Nick Hwang, which allows us to easily interface inputs such as tablets and sensors with the computer systems running the output of sounds and lights.

The Federal Government Interface (FGI) is a single seven-foot-tall nine-sided wooden column painted to resemble black marble. At the joints between sides of the column there are cracks that let LED lights shine through; each side also has an embedded touchscreen. The screen displays information about previous Court cases involving the Tenth Amendment and allows participants to vote for federal control or state/personal control. The summaries were developed from Oyez, a free multimedia archive devoted to making the Supreme Court of the United States accessible to everyone created by Cornell’s Legal Information Institute (LII), Justia, and the Chicago-Kent College of Law.

When developing the concept for v.erses, we were particularly struck by the final clause of the Tenth Amendment, which reads “are reserved to the States respectively, or to the people.” This unambiguously reserves all nondelegated power to its original source, the people. The States/People Instrument (SPI) is a site-specific multiplayer sensor that sends information about participants’ gestures to the FGI. The decisions made using the FGI control what kind of sonic and visual mappings are possible through players’ interaction with the SPI. Essentially the decisions made by the participants on the federal government powers decide the affordances, or what is possible, of the musical game.

Rules are written to be interpreted. How accurate that interpretation will be, and what beauty or lack thereof might be found in that rule’s execution, depends on who reads and executes. If read by a computer—software, in other words—the interpretation will likely be strict, assuming the programmer wrote precise instructions. If read by a person, the interpretation will vary, and the way it is executed even more so. With games, this is a notable difference between video games and board games, card games, sports, and other forms of play adjudicated by players. The “wiggle room” of human interpretation and execution is much more variable than that of a computer. With the Constitution—thus far interpreted and run by people—the results are closer to that of a board game, subject to “house rules,” regional play patterns, the values and beliefs of the reader, and so on.

The Tenth Amendment is a great example of this. As a rule written for interpretation and execution, it is understood both as a clear and concise declaration of the limitations of federal government reach and also as an open-ended and malleable line marking the boundaries and overlaps of federal and state governance. Beauty is in the eye of the beholder. If one person’s idea of a beautiful government is one of minimal federal oversight, then the Tenth Amendment is a precisely phrased instruction. Another person’s idea of beautifully conducted governance involves an equitable and expansive oversight of all states and citizens, leading to an interpretation of the Tenth as inclusively speaking to the people, regardless of their state of residence.

arts.codes is an artist collective and open-source distribution platform, co-directed by Margaret Schedel and Melissa F. Clarke, that celebrates art with computational underpinnings.

Melissa F. Clarke is a Brooklyn-based educator, designer, and artist working at the intersections of data, science, and design. In her work, she extrapolates interdisciplinary research into multimedia installations, generative environments, audiovisual sculptures, performances, and printed images. A graduate of NYU ITP, Clarke has taught media arts at SUNY Stony Brook, and has participated in residencies at Pioneer Works, the Simons Center for Geometry and Physics, and Visible Future Labs at SVA.

Margaret Schedel transcends the boundaries of disparate fields to produce integrated work at the nexus of computation and the arts. With an interdisciplinary career blending classical training in cello and composition, digital audio research, and computational arts education, she is internationally recognized for the creation and performance of ferociously interactive media. Her research in the sonification of gesture and data takes form in interactive opera, VR, and video games. Schedel is professor and co-director of computer music at SUNY Stony Brook.